“Sweet Cherry Chicken Lollipops”. What should I expect? Imagine yourself a beautiful lady with killer looks talking sweet to you. You’re getting interested don’t you? How about she’s a bit spicy and seducing you by subtly blowing some smoke in your face and licking a lollipop? That’s what these chicks are all about: subtly smoked, sweet and tempting lollipops with a spicy touch making you want more. These chickies didn’t steal their name. Who could resist their temptation?

Chicken lollipops are trending in the BBQ scene for a while now. They look incredible and the technique used for these “Sweet cherry chicken lollipops” is leading to a juicy tasteful and well balanced result. Somehow it might seem a bit scary to start making these. It seems like a hell of a job, especially when you lack deboning techniques like me. That’s exactly the reason why I repeatedly postponed this cooking session.

Sometimes I need a little boost to get over this kind of “fear”. Three things were pretty helpful in this process. First of all I got an awesome BBQ book from my wife called “Smokey Goodness” by former “World champion BBQ” Jord Althuizen. As you might have read over here, Jord is also envolved in “The Rough Kitchen” . A catering project he set up based on his BBQ experience. I’ve been eating there three times now: once in Amsterdam’s “Foodhallen” and two times at Graspop Metal Meeting. Each time pleasantly surprised by the quality they bring. 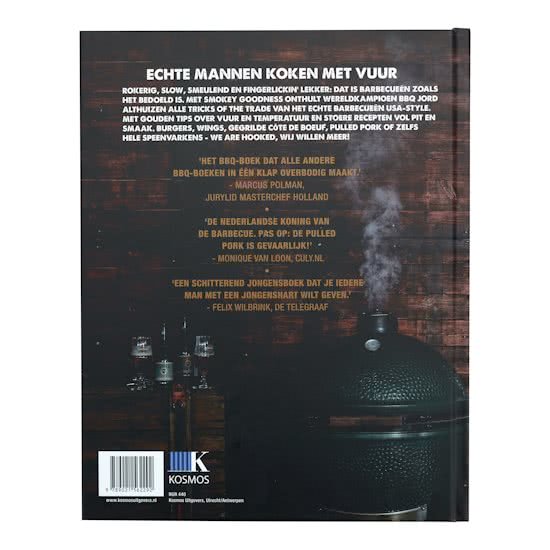 It’s obvious Jord aims for quality in what he brings. Both the catering concept and this book are brought with an eye for detail and mood building. This book contains stories about his experience in the scene along with awesome photography and delicious recipes ranging from KCBS classics, over fish to dessert recipes. There’s even a vegetarian section to be complete. All brought to you with an excellent eye for detail. The suggestions on what to drink along the recipes could be a perfect example on how well this book has been put together.

If you’re speaking dutch and share some interest in this book you could buy it over here: Smokey Goodness . It’s the first time I use affiliate links like these hoping to cover some costs for this blog. But you can trust me on this: I won’t promote things I don’t believe in and will share my honest opinion over here.

A second boost came by a friend who owns the same book. Some weeks ago he invited us over at his place for dinner. He presented us the BBQ party platter as appetizers. This plate consists of Moinkballs, the marvelous tasting Atomic Buffalo Turds (ABT’s) and Chicken Honey Pops. They all tasted superb. It even lead my wife to buying drumsticks a few days later. She thought I’d might want to make those lollipops too. I don’t need to tell you my answer I guess? Anyway… Since we just recently ate those “Chiken Honey Pops” I was searching for another recipe as inspiration.

That’s the point where I stumbled on the “Fingerlicking Sticky Chicken Drumsticks” by Bryan Krumpli I had saved a while ago. I actually stayed close to the original recipe (to my norms). However the sauce tasted delicious the way it was by Krumpli it was a bit too sweet for us. That’s why I added some extra vinegar. The Sriracha and extra hot Paprika powder were added to bring a bit of heat (surprising isn’t it?). Having the “Sweet Cherry chicken lollipops” in mind I added an extra tablespoon cherry jam to enhance the cherry taste. Actually it did in a verry subtle way (you might want to add another tbsp.). To be complete about the changes I’ve used the rum wood I got from Smokewood Germany in the smoking process of these lollipops. I tossed in two chunks and ended up with a well balanced smoked flavor.

In order to get these good looking lollipops you’ll have some work preparing the drumsticks. The chicken meat needs to be cut loose and pushed down from the bone. A good knife and scissors is welcome in this part. First you need to make a cut around the part of the leg near the knuckle. After doing this you can push the meat aside.

Next part you need to remove the knuckle. It helps to put your knive under cartilage and lift it. Some cutting while doing this can be needed. Actually it’s a bit of a search to find out how it works, but once I found out I managed to work a bit faster. Last but not least you should remove the tendons and tiny bone against the leg. I pushed the meat a bit further away and cut through the bone and tendons. Now your lollipops are ready for the dry rub.

I know these lollipops look difficult but believe me they are worth every second of preparation! I’m happy I finally got over my fear and hope you’ll try these too! I promise you they will make a strong impression! Hope to hear all about your experiences in comments below. And if you still have a little bit of time left you might share this post with your friends 😉

For the Rub
Glaze - BBQ Sauce

1. Take the drumsticks out of the fridge and make a cut around the bone right beside the knuckle. A sharp knife is useful in this part.

2. Push the meat aside to the thick end of the drumstick.

3. Slide the tip of your knife under the cartilage and lift the your knife while cutting the tendons. This way you can remove the cap.

4. Push the meat back and cut through the small bone and remaining tendons on the thicker part of the bone. Clear the rest of the bone so you end up with a nice lollipop.

5. Rub the Lollipops with the above mentioned rub and put aside for about an hour.

6. While waiting you can prepare the sweet cherry BBQ sauce and start your fire for indirect cooking at 180°C/350°F

1. Mix all ingredients in a pan. Let simmer until it reduces into a sticky BBQ Sauce. You can do this on the BBQ too but since we smoked the Lollipops I didn't want to end up with too much smoke taste.

2. Put the sauce in a bowl and let cool down. Now you're ready for the last part:

1. Toss in two chunks of rum wood (or your favorite wood chunks) and wait until the smoke turns blue.

2. Once the smoke is blue put the lollipops in the BBQ and close the lid for the next 25 minutes. Now your lollipops will get the awesome smokey flavor! Keep in mind that the more you open the lid the less smoke flavour you will end up with.

3. Put the BBQ sauce in a large bowl and dip the lollipops in the sauce. This will make them look nice and shiney.

4. Put them back in the BBQ for another ten minutes until they get the nice red colour. Enjoy the heavenly look and taste of these "Sweet Cherry Chicken Lollipops".